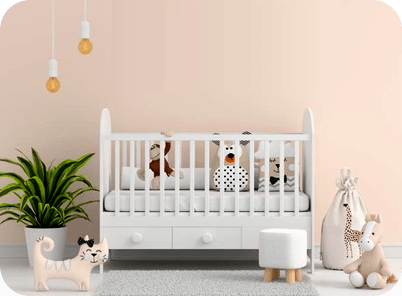 Babies often wriggle around a bit before going to sleep – just like we all do. However, while it’s normal for us adults to flip from our back to our side to our front, it’s not so safe for a baby.

That’s why it’s crucial to ensure they are sleeping in a safe position, at least until they are strong enough to move a little more independently.

Taking these precautions can significantly reduce the risk of SIDs or any other safety concerns you may have.

The Back Is The Safest Place

The safest and most effective position for your baby to sleep in is on their back.

Every time you put them down to sleep, whether for a whole night or a short nap, get into the habit of placing them on their back.

Placing your baby on their back helps them to breathe easier. In fact, when a baby is lying on their back, their trachea lays on top of the esophagus, which makes it impossible for them to choke, spit up or vomit as nothing can pool on their trachea.

Other research shows that sleeping on their back may mean they are less likely to get ear infections, a blocked nose, or fever-like temperatures.

No other sleep position other than on their back is advised for babies.

However, we all know that they roll and wriggle, moving from one position to the next.

When this happens, it’s always a good idea to place them back on their back to prevent any harm from happening.

Before anyone else puts your baby to sleep, remind them about the back sleeping plan. If a person is not caring for a baby each day, even as a childminder or babysitter, they may not remember or know the best sleeping position for your baby.

That’s why a gentle reminder is always a good idea when you hand over responsibility.

Sleeping on their stomach

There is never a safe time for your baby to sleep on their stomach, especially not when they are laying down for a nap by themselves.

By sleeping on their belly, they run the risk of cutting off their own airways and hindering their breaths.

It also dramatically increases the risk of choking on spit-up or vomit.

When a baby sleeps on their belly, they may not get the oxygen flow they need as they continue to breathe in the same air over and over again.

When the oxygen flow decreases and the carbon dioxide flow increases, the baby should automatically wake up as it’s a natural body reaction.

However, it isn’t always the case. Lastly, sleeping on their stomachs may also impact heat distribution, as certain parts of their body overheats and others cool down.

This will affect their comfort and relaxation and increase the potential of SIDs.

Did you know? When a national campaign ran in the States that promoted parents to place their baby on their back to sleep, the incident rate for SIDs reduced by almost 50%

Sleeping on their side

Contrary to what you might think, sleeping in a fetal position is not safe for babies. Yes, it is called that as it represents the position they generally have in the womb, but they were completely protected when they were in the womb.

If a baby is prone to sleep on their sides, do your best to get them in the habit of sleeping on their back.

No protection you put in place can prevent them from rolling over when lying on their sides. Even the most stable pillow or barrier could end up posing as more of a hazard than a safety net.

What if they are placed that way by accident?

Please do your best to fix it as soon as you can. Even sleeping in these positions for a couple of minutes can do damage, so it’s best to avoid it at all times possible.

Back sleeping is the only safe option for a baby until they reach at least one year old.

Is it safe for them to sleep on their belly in my arms?

Yes, when a baby is sleeping in your arms, it’s a different situation. You are there to supervise and help them should you notice any abnormality or increase or decrease in breathing.

Sleeping a baby on their belly in your arms is pretty standard as it’s part of the five ‘s’ system that some parents use to soothe their baby and recreate the comfort they had in the womb. Those S’s include swaddling, shushing, swaying, and sucking.

You can read our article about the 5 S’s here. However, belly or side sleeping is not safe if you are not there. Yes, that also includes if you’re sleeping in the bed next to them.

Always position your baby on their back to sleep. Sleeping in other positions is not safe and increases the risk of SIDs